Success Stories, Past, Present, and Future – „The Erlangen IQN and its Perspectives 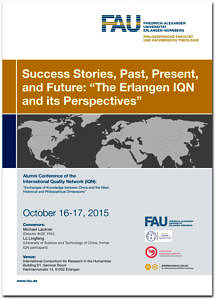 From 2001 to 2004 the Department of Sinology at FAU hosted an International Quality Network (IQN) sponsored by the DAAD (German Academic Exchange Service) dealing with knowledge transfer between China and the West: “Exchanges of Knowledge between China and the West. Historical and Philosophical Dimensions”. During that time around 30 scholars came to Erlangen for periods of 6 months up to a whole year. The IQN set high value on promoting young scholars, therefore among the invitees were 20 students from China and Japan preparing their Master or PhD. To this day, 14 people from this group are holding a professorship in China, Japan, and the USA, among the German members 3 are currently working as professors.
The conference was held to appreciate these extraordinary stories of success as an example of early efforts for internationalization at FAU, to show the sustainability of the scientific network generated at the time, as well as develop perspectives for the future.
The conference was financed by generous contributions of the University, the Confucius Institute and the International Consortium for Research in the Humanities.
Below, several reports of participants of IQN can be found in both English and Chinese, as well as pictures taken at the conference.

Brief outline of the project and its prospects
Jiang Weishui 蔣渭水 (1891-1931) was one of the leading personalities of Taiwanese political, social and cultural activism against Japanese Colonial rule during the 1920s. He figured prominently in some of the most important Taiwanese organisations of his time, such as the Taiwanese Cultural Association (Taiwan Bunka Kyôkai [Taiwan Wenhua Xiehui] 台灣文化協會, 1921-1930), the League for the Establishment of a Taiwanese Parliament (Taiwan Gikai Kisei Dômei [Taiwan Yihui Qicheng Tongmenghui] 台灣議會期成同盟會, 1920-1934), and the Taiwanese People’s Party (Taiwan Minshûtô [Taiwan Minzhongdang] 台灣民眾黨, 1927-1931).

In formulating ideological foundations and organizing a wide range of endeavours, Jiang Weishui exercised considerable influence on anti-colonial resistance during the 1920s. During this period, a continuing struggle for dominance over cultural representations of colonial subjectivity took place not only between Taiwanese activists and the Japanese colonial regime, but also within circles of Taiwanese activism. Among them, to cite but one example, one can find Jiang Weishui’s critique of concepts of assimilation put forward by the Chinese philosopher Gu Hongming 辜鴻銘 who collaborated in this respect with Japanese organizations. Although the political implications of competing concepts of colonial subjectivity were not, each and every time, explicitly stated by participants of debates, they still remain detectable as a central focus. Yet, not only the authenticity of the content of colonial subjectivity and resistance as such was disputed, but its also different modes and forms of expression (in journals, summer schools, political, social and cultural movements etc.).

Up to the present time, Jiang is being considered as one of the central figures of Taiwanese activism during the middle period of Japanese colonial rule over Taiwan. Yet, no consenus has been reached, neither in academic research nor in broader expressions of collective memory (as expressed in various events of commeration since 1945), on the nature and meaning of his political, social and cultural activities. It remains, consequently, open to debate whether Taiwanese activism, as visible in Jiang’s endeavours, shall be understood as anti-colonial and/or nationalist in kind, as an expression of some sort of »Taiwanese« or »Chinese« consciousness etc. Contemporary debates on Jiang Weishui in particular or Taiwanese resistance to Japanese colonial rule in generel bear, at many instances, a strong political imprint and, therefore, should be analyzed in a multi-layered research design. However, the foundation of any attempt to come to terms with the diversity of conflated collective experiences that affect the collective memory of Jiang Weishui has to be a close reading and interpretation of his writings in the context of colonial history. Major topics of his writings include the history and ideology of the Guomindang, marxism and leninism, prison writings and diaries, nationalism, political, social and cultural movements in Taiwan and China, manifestos and theoretical foundation of the Taiwanese People’s Party, social life in colonial Taiwan (education, public hygiene, public sphere).

Starting from a hermeneutical approach to his writings, the continuing post-World War II discourse on Jiang Weishui and the meaning of his activism will be analyzed in order to shed light on the process of transformation which shaped current Taiwanese concepts of nationalism, transnationalism, collective identities, colonial resistance, post-colonialism, and the writing of Taiwan’s history in the 20th century. Furthermore, research on Jiang Weishui and his enduring topicality in Taiwanese academic and non-academic, public areas offers new insights not only in the range of interaction between academic and political/societal spheres within Taiwan’s contemporary democratic polity, but also in the relevance of historical memory during the decades of democratization in Taiwan.

The project marks a collaborative effort from the fields of Chinese and Japanese Studies, which is rarely accomplished nowadays. In this sense, it is a truly interdisciplinary endeavour – an asset which is even further enhanced by the fact that the research design combines approaches from intellectual history, social sciences and philology (partial translation of writings from Jiang Weishui into German approx. 120 pages from the original text in total), covering topics related to anti-colonial movements, nationalism, post-colonialism, political thought. It may be expected that the project will have a considerable impact on related fields of research on East Asia, and may encourage further research.

Private bibliophiles had become a common phenomenon in the Late Ming era’s commercialized world and its significant expansion in the supply of books, both in terms of quantity and quality. Representative collections were built up, with some of them projecting general knowledge ideals and others counting on individuality.

Exemplifying by way of one book collector, this project delineates the changes of a library’s contents and organization within a period of great political, cultural and intellectual transformation. The bibliophile is examined in his role as the consumer and producer of books as well as on his function for the transmission and circulation of knowledge in China’s late 16th and early 17th century. Keywords are networks of knowledge and the purpose of knowledge for identity construction and social status. The representation of the library in the catalogue, its public face, gives view to the social function of knowledge assignments. The fact that Qi Chenghan enlarged the collection of his grandfather and father invites an examination of the issue of identity in its generational dimension and as regards the continuation or rupture of traditions.

Within all that, intellectual and material networks were necessary to built up and maintain the library. In addition to the explicit, established or legitimated network patterns that are already widely known, this study will uncover implicit intellectual and political networks and analyze their forms and functions.